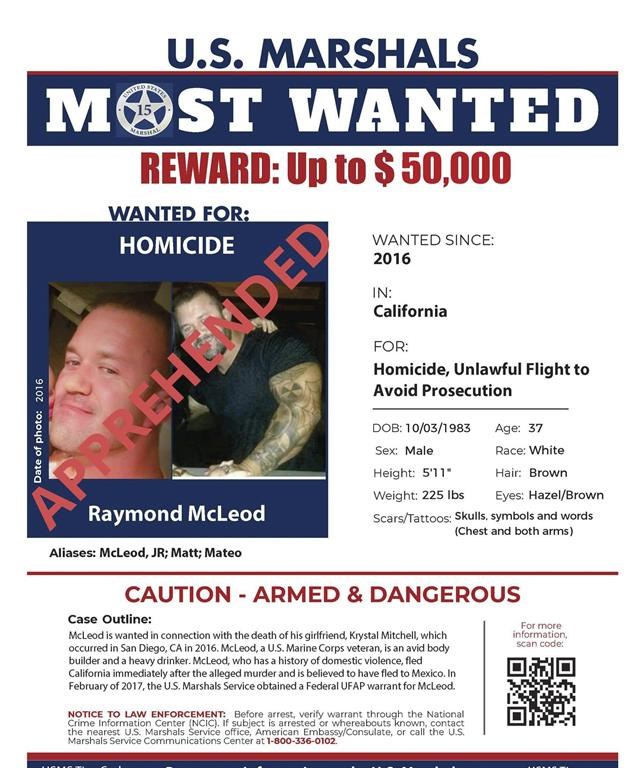 SAN DIEGO (AP) — A tip along with the perseverance of the mother of a woman killed in San Diego in 2016 led to the arrest of her boyfriend, a U.S. Marine veteran who fled to El Salvador and was teaching English there, prosecutors said Friday at the arraignment of Raymond McLeod.

McLeod 37, who was on the U.S. Marshals’ 15 Most Wanted list, pleaded not guilty to a murder charge in San Diego Superior Court. He is accused of strangling his girlfriend, Krystal Mitchell, 30, a mother of two.

McLeod was captured last month in the Central American country after the U.S. Marshals Service received a tip that he was teaching English at at school in the city of Sonsonate.

“If nothing else, this case represents what it means when the public responds and they tell law enforcement what they’ve seen in order to bring justice to grieving families,” said San Diego County District Attorney Summer Stephan at a news conference held after the Friday morning arraignment.

The person will receive some or all of a $50,000 reward the service had offered for information leading to McLeod’s arrest.

McLeod was taken into custody Monday afternoon by local law enforcement and confirmed his identity to accompanying U.S. authorities.

Both McLeod and Mitchell lived in Phoenix but at the time were visiting a friend in San Diego.

On June 10, 2016, the friend found Mitchell not breathing and paramedics pronounced her dead. Homicide detectives found signs of a struggle.

If convicted, he faces a possible sentence of 25 years to life in prison, according to court records.

U.S. Marshals learned from authorities in El Salvador that McLeod likely entered the country illegally. He did not have any identification on him when he was captured.

“She was a driving force in this arrest,” Deputy Marshal Joseph O’Callaghan said.

According to court documents, the night before Mitchell’s death, the couple went to a bar where a person saw McLeod slap Mitchell in the face. When the person tried to intervene, they got into a fight with McLeod and the couple was kicked out of the bar, the newspaper reported.

Surveillance video showed McLeod grabbing Mitchell by her neck and shoving her into an elevator after they returned late to the apartment, the newspaper reported. The next day after McLeod had left the apartment, their friend found Mitchell’s body in the guest room.

Investigators said he had rented a car, bought Mexican insurance for it, and fled the country alone, according to court documents.