Still no clarity on Jackson’s return after Ravens’ loss

Still no clarity on Jackson’s return after Ravens’ loss 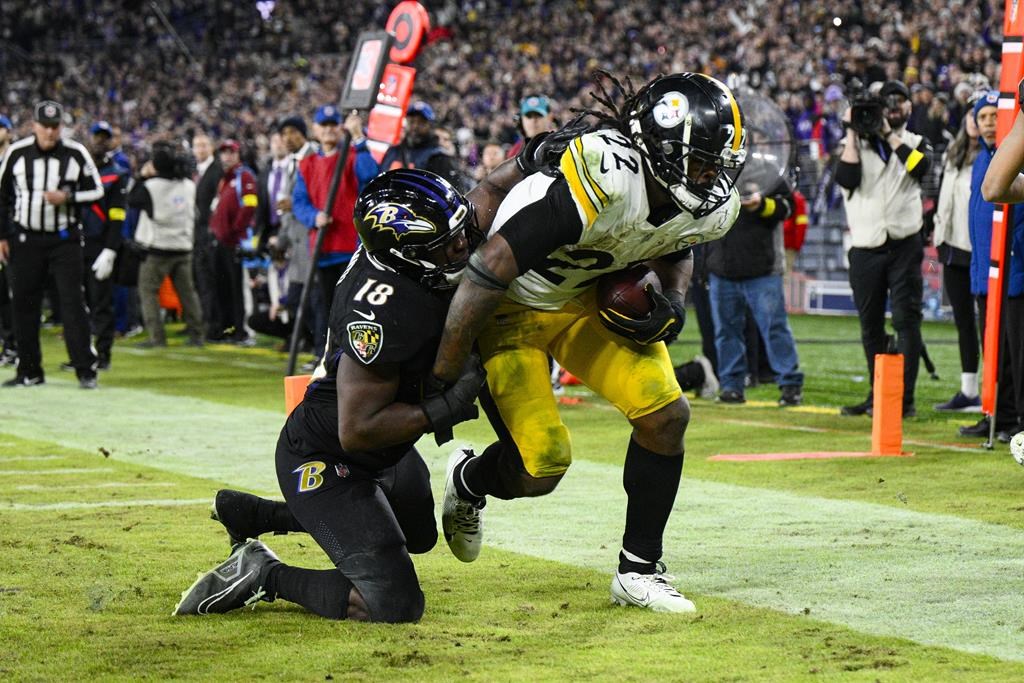 OWINGS MILLS, Md. (AP) — It feels as if every weekend follows a familiar pattern for the Baltimore Ravens these days.

They play a hard-fought, low-scoring game in which touchdowns are scarce. Sometimes they win, sometimes they lose — and there’s never any more clarity on when Lamar Jackson might be back.

Coach John Harbaugh said Monday he doesn’t know if Jackson will practice this week, and time suddenly isn’t on Baltimore’s side. The Ravens are headed to the playoffs, but their 16-13 loss to Pittsburgh on Sunday night only reinforced what has become obvious: They could really use Jackson, and he’ll probably need to play his absolute best to make this offense effective.

Jackson has missed four straight games with a knee injury and hasn’t practiced at all in that span. Even if the star quarterback returns by the team’s first playoff game, there are now real questions about whether he’ll have enough time to work his way back to 100% by then.

“I just can’t think about that,” Harbaugh said. “I’m just going to listen to the doctors and to Lamar, and we’re prepared.”

Cincinnati went into Monday night’s game against Buffalo with a chance to clinch the AFC North, but a win by the Bills meant the division would be decided by a Ravens-Bengals showdown next weekend. Regardless, Baltimore’s schedule is about to become a lot different.

The Ravens (10-6) have played 10 straight games against teams that are currently at .500 or worse. Now they’ll take on the defending AFC champions at Cincinnati, followed by whoever their playoff opponent is.

Harbaugh indicated that the status of the division race probably wouldn’t impact who plays next weekend.

“My gut first reaction would be no, because we’re going to be playing for seeding implications as well,” he said. “There’s a lot at stake right up until the end of the season here.”

It’s hard to put too much blame on the defense, which has held seven of its past eight opponents to 16 points or fewer. The Ravens allowed a last-minute touchdown to Pittsburgh, but that was the first TD conceded at home by Baltimore since Oct. 23.

Offensive balance has been poor for a while, with the passing game sputtering, but Harbaugh was also unhappy with the distribution of carries between J.K. Dobbins and Gus Edwards.

Dobbins had 93 yards on 17 attempts, while Edwards had three carries for 2 yards.

“I wasn’t happy about that, in all honesty. Gus should have played more,” Harbaugh said. “We should have had him out there more. Really no excuse for that.”

Star tight end Mark Andrews had injury problems earlier this season, but he looks healthy with the playoffs approaching. He caught nine passes for 100 yards in his most productive outing in more than two months.

“We’re a dangerous team, and I know there’s a fire in this group,” Andrews said after the game. “There’s fire today, and I don’t think the score indicates that, but we’ll be alright.”

The Ravens mostly kept Pittsburgh out of the end zone, but they did allow 198 yards rushing. Najee Harris, with 111, became the first player to run for 100 against Baltimore this season.

“That was not what we expected,” Harbaugh said. “We’re better than that. There’s no question about it. It wasn’t any one thing. It was just not being quite up to standard across the board probably. Guys were fighting, and there was effort.”

T Morgan Moses injured his biceps, but Harbaugh said he didn’t think it was serious. He also said he thinks DE Calais Campbell (knee) and CB Marcus Peters (calf) have a chance to play this week.

2 — The number of receptions by Baltimore wide receivers Sunday. It’s a problem that hasn’t gotten any better, and there’s only so much the tight ends and running backs can do in the passing game to make up for it.

The Ravens lost their previous trip to Cincinnati 41-21 in 2021, allowing Joe Burrow to throw for 525 yards. But in the first meeting this season, Baltimore won 19-17 at home.

Credit: Still no clarity on Jackson’s return after Ravens’ loss