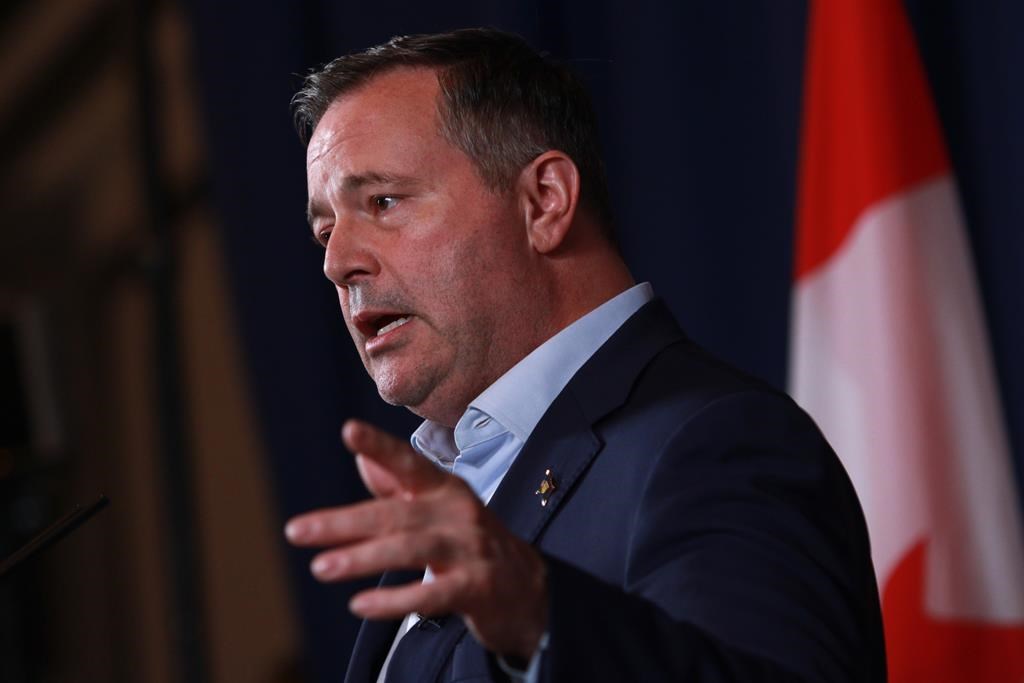 EDMONTON – Premier Jason Kenney is defending Alberta’s lieutenant-governor after she suggested she may not automatically pass a sovereignty act bill proposed by a candidates vying to replace him as United Conservative leader.

He characterized it as “cockamamie,” illegal and a recipe for business and investment to flee a province no longer committed to the rule of law.

Smith, should she win the UCP leadership race on Oct. 6, has promised to immediately introduce a bill allowing her government to ignore federal laws and court rulings deemed not to be in Alberta’s best interests.

Legal scholars and politicians, including Kenney and government house leader Jason Nixon, have sharply criticized the plan and questioned whether it would even pass in the legislature.

Lt.-Gov. Salma Lakhani, when asked by reporters Thursday whether she would pass Smith’s proposal, said she would not prejudge it but that she has a duty to ensure any bill she signs into law follows the Constitution.

“(Lakhani) was asked unprompted questions by media and I think she gave general answers about her duties as lieutenant-governor: that if she faces something problematic, she would take on expert advice and consider all the constitutional principles,” Kenney told Edmonton radio station CHED.

Kenney said the proposal has put Lakhani, and the entire province, in a potentially chaotic and dangerous bind.

“It’s really the anarchy act or, as one conservative constitutional scholar puts it, the Alberta suicide act,” said Kenney.

“It would put the lieutenant-governor in a very awkward position for the legislature to pass a law saying that it will not enforce the laws. That is without precedent, at least in Canadian and perhaps in British parliamentary history.

“It would also send a devastating message about investor confidence,” he added.

“If the government proposes (a law) saying that we will rip up contracts, we won’t enforce court orders, we’ll ignore the rulings of the Supreme Court, we’ll choose which laws we enforce, we’ll ignore the Constitution, well, what investor in their right mind would put money at risk in Alberta?”

Smith responded in a statement, urging Lakhani to retract her comments.

“The lieutenant-governor is an unelected figurehead, appointed by the prime minister, that plays a wholly ceremonial role in our system of government,” Smith said.

“She does not have authority to refuse assent to bills democratically passed in the provincial legislature.”

Smith also renewed her criticism of Kenney for abandoning his promise of impartiality in the leadership race to speak out against her.

“Never in our province’s history has an outgoing leader of a party so brazenly and inappropriately inserted himself into the election of his successor,” she wrote.

“I urge him to do a better job of acting like a responsible statesman.”

He has repeatedly defended his comments by saying he is not speaking on Smith’s proposal but on the underlying policy paper on which it is based.

In the paper, they call for radical action like refusing to implement federal laws and court rulings in order to combat decisions that are mortally wounding Alberta’s development.

Cooper himself, in a June newspaper op-ed, said the unconstitutionality of such a proposal is not a bug in the program but its primary feature.

Smith grabbed headlines with the proposal in June as the campaign heated up, calling it necessary to administer a shock to a “lawless’” federal government undermining Alberta’s economy.

However, as criticism of such a bill mounted in recent weeks, Smith began downplaying the original proposal.

She has recently been characterizing it as a lawful recitation of how Alberta views the separation of powers under the Constitution, prompting confusion over what it is she is really proposing.

Smith said she will answer that after the Labour Day weekend.

“The entire objective of the sovereignty act is to uphold and defend the constitutional rights of Alberta and the Charter freedoms of our people from continued unconstitutional attacks by Ottawa,” Smith wrote.

“I will be announcing further details of the proposed particulars and mechanics of the bill next week, with the actual language of the bill to be drafted.”

This report by The Canadian Press was first published Sept. 2, 2022.