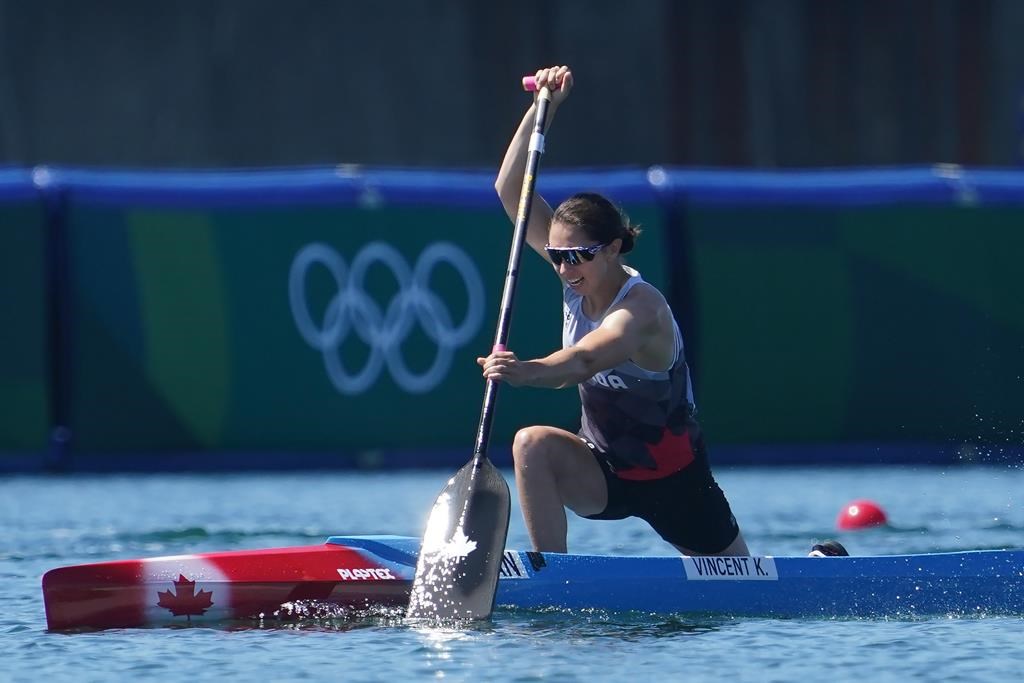 DARTMOUTH, N.S. – Katie Vincent is once again aiming to make Canadian canoe racing history, as she and up-and-comer Connor Fitzpatrick join forces in the mixed category at this week’s world championships.

Vincent, the reigning world champion in 200 metres, was a bronze medal winner in the debut woman’s C-2 500 metres race at the Tokyo Olympics last year, blazing a trail for female paddlers who battled for years to have the event introduced to the games.

The world championships begin Wednesday on Lake Banook in Dartmouth, where Fitzpatrick grew up paddling and Vincent, from Mississauga, Ont., now trains.

The mixed race finals are scheduled to take place on Sunday in the same lanes where they regularly work out together.

During an interview on Friday, Vincent said there’s excitement on the national team to see men and women racing in the same boat at home — an event pioneered at last year’s world championship in Copenhagen, where the duo placed 7th in a 200-metre race.

She said the introduction of mixed teams in running, swimming and triathlon at the Olympics is now a proven crowd pleaser, and reflects the reality that men and women often also train together.

“It unites our sport in a way it never has been united before,” she said in an interview at the Senobe Aquatic Club, nearby the freshly constructed viewing areas where about 40,000 spectators are expected this week.

“We’re trying to show that, even though this (mixed) event isn’t in the Olympics, we’re competitive and we’re a threat around the world,” she said.

In 2009, when Lake Banook last hosted the 2009 world championships, women’s canoeing was still an exhibition event, and the best female paddlers were lobbying to have their sport included in the Olympics.

That’s changed dramatically over the past 13 years, with female canoeists Vincent and her former paddling partner Laurence Vincent Lapointe winning Canadian medals for the canoeing and kayak team at the Tokyo Olympics.

Fitzpatrick, who is three years younger than his teammate, has grown up admiring top male and female stars in his discipline, and admits to being a bit star-struck to be racing with a paddler “who knows the back of the boat better than any woman in the world.”

“It super cool for me to be able to hop in a canoe with someone of this status, and a trailblazer for women’s canoe,” he said.

Vincent said that she encourages Fitzpatrick to set the pace, and then matches it, while using her experience steering the two-woman boat to “keep the boat in the lane.”

The duo recently won a silver in a World Cup race, but competition coming from Hungary, Ukraine, China and Germany is expected to heighten at the worlds, as paddling powerhouses are increasingly prioritizing the mixed event and stacking the race with their top athletes.

Vincent is adding the mixed event to an unusually varied race program, as she seeks to defend her title as the world’s top 200-metre racer. She will also race the C-2 and C-4 500-metre women’s distances, and will complete her week with an individual five-kilometre race.

She said the long-distance race is on the schedule to test her aerobic capacity, something she wanted to begin building three years before her next Olympic Games. Fitzpatrick is racing in the C-1 one kilometre, in addition to the mixed event.

Vincent said on Sunday they’ll shoot for an intangible sensation called “boat feel” that is the key to a successful two-person, 500-metre race, where every one of about 150 strokes will count.

Fitzpatrick describes the sensation as being “almost like you’re pointed downhill,” in the races when their paddles hit the water perfectly throughout a race.

The paddlers say they’re conscious that the children who flock to this lake each summer will be closely observing their efforts.

“I hope by us being here, and Connor and I working together in a mixed boat, it can have young girls and boys look up to both of us and say, ‘Look how cool this is. A guy and girl working together, canoeing together,’” she said.