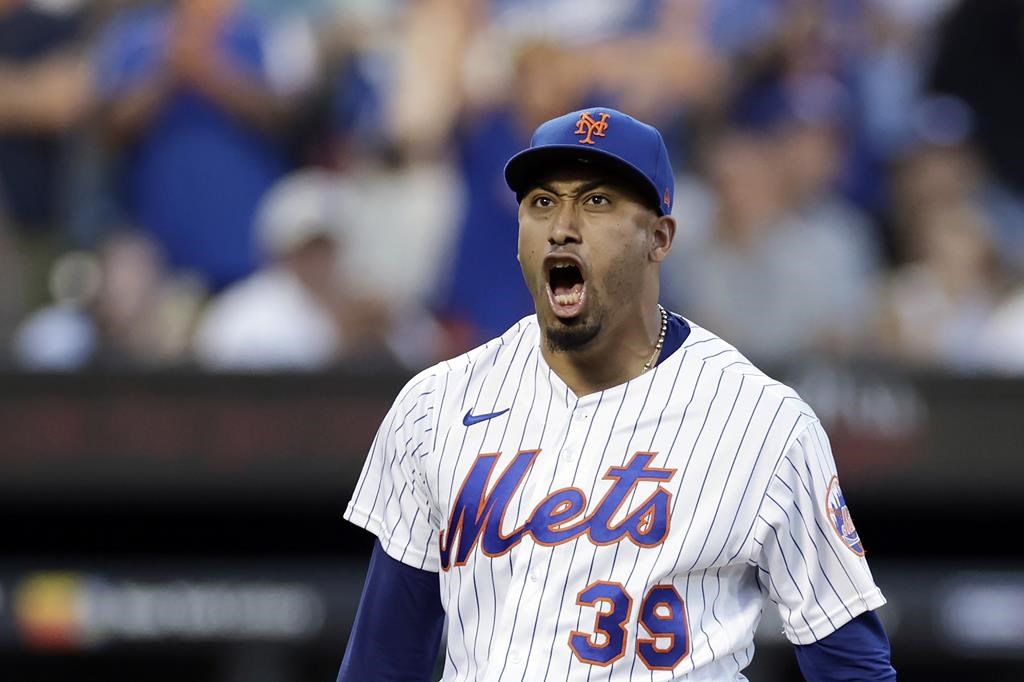 NEW YORK (AP) — Edwin Díaz struck out Gavin Lux on a 102.8 mph fastball to escape a jam in the eighth inning, and the New York Mets beat the major league-best Los Angeles Dodgers 5-3 on Thursday.

Francisco Lindor hit a tying double in the sixth and scored the go-ahead run on a sacrifice fly by Darin Ruf after the Mets were held to one hit in five innings by Clayton Kershaw, who made his first start since Aug. 4.

NL East-leading New York took two of three from Los Angeles, its first series win against the Dodgers since Sept. 3-5, 2011. LA lost consecutive games for the first time since July 25-26.

Chris Bassitt (12-7) allowed two runs and six hits in six innings for his fifth straight victory, matching his win total from last season with Oakland. He departed after the Mets took a 3-2 lead in the sixth.

New York led 5-2 when Díaz opened the eighth by walking Freddie Freeman and plunking Will Smith. Freeman advanced to third on a warning-track flyball by Max Muncy and scored on Justin Turner’s flyball near the 408-foot sign in center.

Díaz then escaped by whiffing Lux on the hardest pitch of his career and calmly walked off the mound. It was the fifth time in his last 13 appearances that the Mets closer pitched in the eighth inning.

Adam Ottavino followed with a perfect ninth for his third save.

Kershaw returned from a back injury and settled down after a rocky beginning. He struck out six and walked three but was on a pitch count and pulled after throwing 73 pitches — three more than his simulated game on Saturday in Miami.

Lindor’s single three batters in was New York’s only hit until Starling Marte opened the sixth against Chris Martin (4-1) with an infield single. One pitch after hooking a ball foul down the right field line, Lindor doubled to center field as Marte easily scored.

Brandon Nimmo added an RBI double in the seventh when his popup dropped between second baseman Gavin Lux and right fielder Mookie Betts. Nimmo then scored on Marte’s single.

Kershaw walked three in a 25-pitch first inning. After Mark Canha took ball four to give the Mets a 1-0 lead, Kershaw got Jeff McNeil on a popup. He retired his final 13 batters.

Chris Taylor hit a two-run single in the second for the Dodgers.

Mets: C Francisco Alvarez, the club’s No. 1 prospect, was diagnosed with a loose body in his right ankle and a tentative plan is for him to resume baseball activities in three to four days based on his response to an injection. … Rookie 3B Brett Baty underwent surgery for a torn ligament in his right thumb.